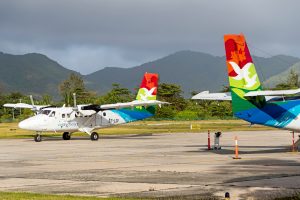 The “Iles des Palmes Airport” (PRI/FSPP) on Praslin Island is mainly used by Air Seychelles who are serving this little airfield more than 10 times a day. They are flying from/to Mahe (the biggest airport on the Seychelles) with one of their DHC-6-400. Other traffic is Zil Air helicopters or IDC Aviation BE1900D. During the late 1990s Praslin underwent an expansion to deal with increased passengers and larger planes. The airport was officially reopened on June 3, 2001. The cost of the renovation is around 40 million Seychellois rupees. Praslin Airport handle around 170.000 passengers per year.