Weeze Airport (NRN/EDLV), rather known as “”Niederrhein Airport”” is a minor regional airport located 5km nearby the municipality Weeze. Until the year 1999, it was used as a military airfield operated by the Royal Air Force Germany as “”RAF Laarbruch””. From 2003 on, Ryanair acquired the airport’s main facilities and opened a base with a few of their aircraft right there, which stresses the importance of Weeze and its low-cost traffic. A few holdovers from the British occupation can be recognized by the high number of army barracks around the field and the RAF-Laarbruch Museum, which hosts a lot of British warbirds. NRN has one runway (09/27) with a length of 3.000 meters and two parallel taxiways. In the north of the airfield, there is a solar park located and a storage area, where the 16 FlyBe-DHC400 are parked. In the south of the airport, the main facilities are placed. The main terminal, where restrooms, a few shops, and a coffee bar can be found.

Weeze also has a large firefighter training area with an ATR42’s fuselage, a former Bell 212-helicopter’s fuselage, and two dummies. In the year 2019, Weeze served more than 1,3 million passengers, which are mainly flown by Ryanair: Ryanair carries as the main carrier at NRN the most significant proportion of passengers, furthermore Air Arabia and Corendon Airlines are operating a few charter flights due to the summer season.

When you arrive at the airport, don’t be afraid of the payment barrier, this is something common and regular at Weeze. 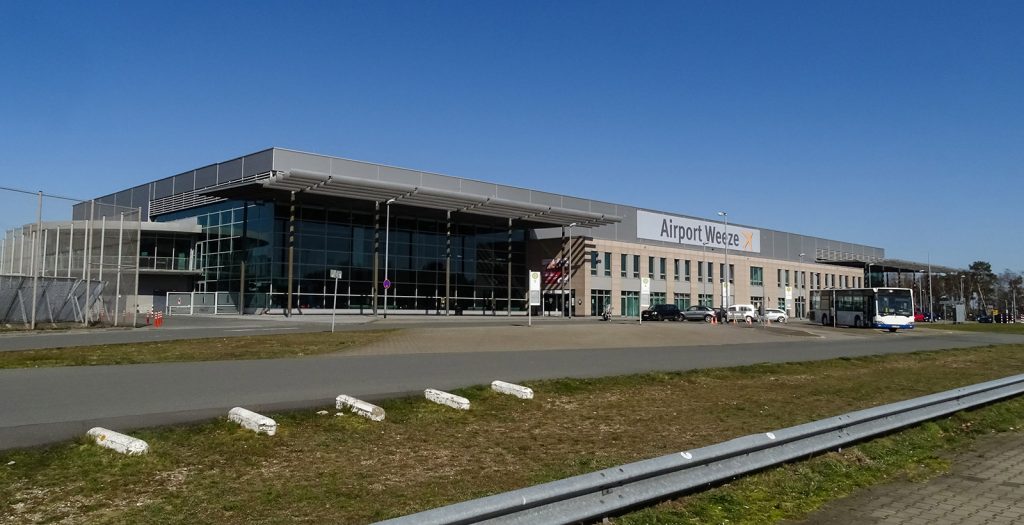