Sarasota-Bradenton Intl. Airport (SRQ/KSRQ), locally marketed and commonly known as SRQ Airport, is situated between the cities of Sarasota and Bradenton. It is the gateway to the “Cultural Coast” – a coastal strip on Florida’s Gulf coast, which stretches from Bradenton on the northern end to Venice in the South. In 2019, the airport saw close to two million passengers and around 132,000 aircraft movements, of which more than 75% were contributed by General Aviation.

The airport is being served by all US legacy carriers (Delta, American, United) including their regional subsidiaries (Delta Connection, American Eagle, United Express), as well as Allegiant, JetBlue, Southwest and Frontier. The top dogs are Delta Air Lines and Allegiant Air with a combined market share of slightly over 50%. Sun Country Airlines and Air Canada Rouge offer seasonal flights from Minneapolis and Toronto respectively, the latter also being the only international route. As indicated above, most traffic is being generated by general aviation, hence spotters will find a great variety of private and biz jets at SRQ. 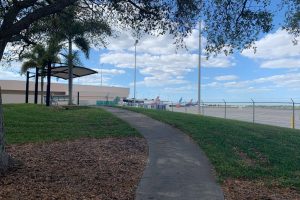 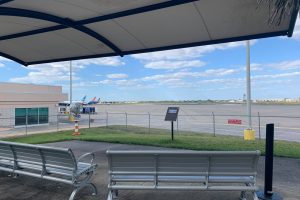 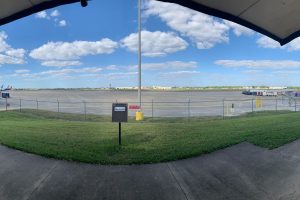 What about 301 Blvd E and Lindberg across from the storage place just south of the FBO in that gravel lot where everyone hangs out? That’s good for morning spotting in the summer and I thought that was an official location too

Thank you for your comment. In fact, I have been to that location – it’s great for registration spotters and for people who just want to watch the traffic, but for photographers (those who care about proper shots), as you have mentioned it, it’s only good for a short window in the morning. Also, for anything except takeoffs from 14 something to get you elevated above the top of the fence is required (ladder, truck bed etc.). Nonetheless, I was going to add this location and therefore had asked in the SRQ spotter group on Facebook quite a while ago if anyone could provide some sample photos, but that request unfortunately remained more or less unanswered. I’ll probably be down there again in February and are planning to get some shots there then, but in case you happen to have some sample shots, which meet our standards (non-backlit, in focus, properly leveled), and you are willing to share them with us, then feel free to send them to support@spotterguide.net (please mention “SRQ” in the subject). Full credit will be given in the header of the guide.

Thanks and happy spotting,

In reference to spot three, my favorite location to spot SRQ when aircraft are arriving/departing runway 14.. If you are looking from the parking lot towards the airport property, on your left hand side where the fencing connects in that corner are a few loose pieces of concrete one could stand on.. if you’re tall enough you can obtain clear shots of both aircraft on final approach as well as on the taxi way, you can also shoot between spacing in the barbed wire.. use your own discretion of course but I myself shoot here often and haven’t come across any issues with restaurant staff, local law enforcement, airport police, airport ops, etc.. there is also a small cluster of trees you can set up a chair and seek refuge under while waiting for the next arrival or departure.. on a small final note it seems between 13:00-14:00 action really slows during this time but allows for a great opportunity to escape the heat and grab a bite to eat..

I’d also like to thank Thomas for creating this article and info contained within.. Amazing work and many kudos as this has become by go to spot for runway 14..

Thank you for your feedback, much appreciated! Would you be able to email us a few sample shots taken while standing on those pieces of concrete at location 3 (Email: support@spotterguide.net)? I only stopped at this place briefly as there wasn’t much traffic at the time. Unfortunately I didn’t notice the concrete blocks.

Also, it would be great if you could provide us with an overview shot of the location (similar to location 4).