Kos Airport (KGS/LGKO) is the gateway to the greek island of Kos. It is located quite in the middle of the isle just a bit southwest of the village of Andimachia. This airfield was opened there back in 1964 and expanded as well as reconstructed over the years as traffic was increasing. As the airport was privatized back in 2017, the new owner – an agreement between Fraport AG/Copelouzos Group – created a plan of how to renew this hub for airtraffic. Thus the airport was said to get new sanitary facilities, a modernized airside area, new fire station and many more features to follow…

The airport serves roughly 2,6 million passenger a year right now; Kos has to thank these numbers to the seasonal holiday charters from Europe mainly, which make the airport busy in summer months. Thus, charters are the main object to focus on here at KGS/LGKO.

Due to “security concerns” the greek government told google to pixelize the satellite images of all airports in greece with military movements. That is why you don´t see all positions as clear as usual. A good alternative is Microsofts Bing Maps where the airports in Greece are still visible… 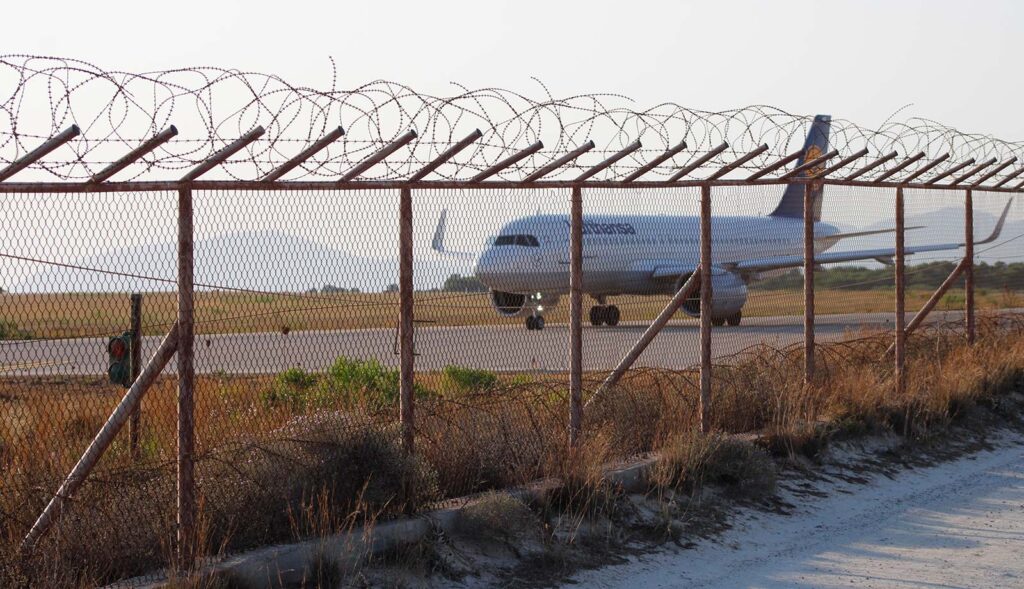 Few updates regarding spotting at Kos:

Spot 1: I talked to the owner of the Taverna and he was very nice and spotting ain’t a problem, you can also stand outside the restaurant on the other side of the street (before the steps down to the main road) and photograph from there, but only arrivals on RWY14 or departures with the church together within a photo are possible now, as the new terminal moved very close to the church now and blocks the view to the apron.

Spot 1b) This is a total new spot and can be added as part of spot 1 or can get a new numbering. From the restaurant cross the street in front of it (there are steps down to the main ring road) and you can enter the airport (non airside) facility through a passage hole in the fence (it’s an official passage). There is some vegetation but 2 meters behind this entrance you can see the newly built parking lot on your right side where you can see the apron west (parking stands 1, 1a, 1b) very close, the fence wire is big enough. It is also a good position for landing traffic to photograph (see pics) which uses the last taxiway exit always if the apron is full.

On Novermber, 3rd 2021 I visied KGS with the following experiences:

Spot 2: The barkig dogs where chained behind a fence/gate app.150 m away from the path along the fence a where no problem. After a short stay in the corner of the fence the airprort security detected me and sent me away. They oberved me during leaving till I have passed the gas station. So keep a very low profile.

Spot 3: On the way to the dune you go through something like a barn with barking dogs in cages.

If you want to take shots of the taxiing and lineup of rwy 14 you cross the parking before the terminal heading to the chapel on left side entering a disposal area. The gate up to the chapel is closed but you can make shots through the fence with only very few space depending on he vegeatation.

The stairs or elevators upstairs where NOT !!! found.

Thank you for this great Spottingguide.
But on the way from the gas station to point 2/3 there are two aggressive dogs. They are are tied on a rope. They are located around the coordinates(36,797755,27,091246). When you walk on the path they bark and walk to the path but the rope stops them a few meters before the path. A few pictures from my spotting trip you can found on my IG : Lima.aviation.photography

The aggressive dogs have not been there anymore. Along the fence to spot 3 you just meet the caged dogs which bark but are harmless, the owner of that areal is also nice! So greet him and proceed!