Raleigh–Durham Intl. Airport (RDU/KRDU) is located about halfway between the two cities of Raleigh and Durham in North Carolina and welcomed 12.8 Mio passengers in 2018. Until 1995, RDU was a hub for American Airlines, which still has quite a presence, but today it is also a focus city for Delta (incl. Delta Connection) and Frontier Airlines. Currently, there is no foreign carrier serving the airport, but a couple of intercontinental flights are being operated by American (772) and Delta (763) to London-Heathrow and Paris CDG respectively. UPS and FedEx are the only cargo operators coming to RDU.

All in all the airport offers a nice mix of traffic, which is dominated by Delta, American and Frontier and is complemented by the common carriers United, jetBlue, Allegiant, Spirit and Southwest. 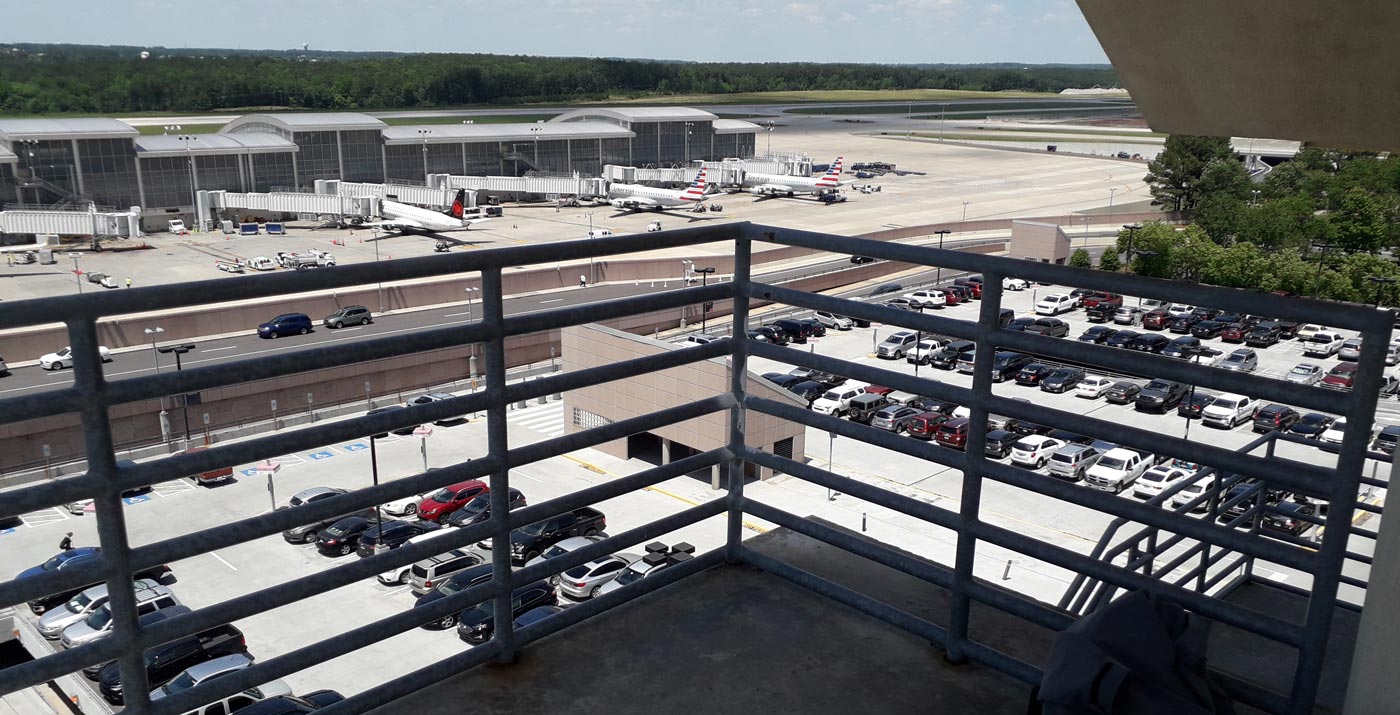 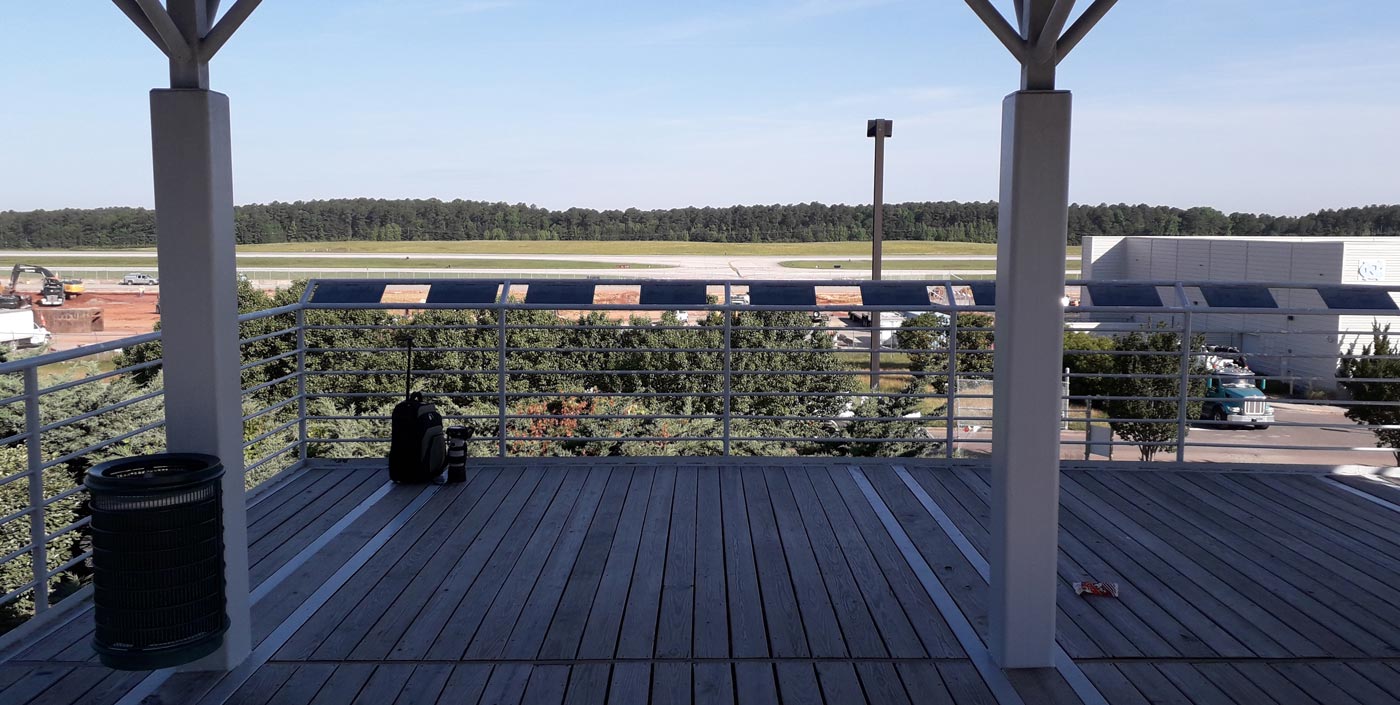 On the RDU website, there is a page for Aircraft Spotting, and a form to file online for spotting from the top of the parking deck. I chanced it one day and was approached by a very nice security officer. I admitted to not having a letter/email, and he asked me to leave but said that I should use the form to get permission. I will from now on.

Thanks for this important info David. I have left a note in the guide. It seems you need the permission, no matter where you are going.
-Julian

The only place you don’t need to fill the form out for is the observation deck. However due to the pandemic the deck has been closed and has not reopened. But otherwise anything on airport property you should complete the form. They’ve also been very flexible about filling out the form in less than a 48-hour timeline for me. So even if you are heading out to catch something special on short notice like a diversion I always fill out the form and have not been bothered since that program was instituted.

Also one other note to respond to Alex’s comment from 2019; TAC Air bought the old GA Terminal so that is no longer an option for spotters. Others have tried and been turned away. It is now a lobby solely for TAC Air customers/passengers.

Thank you guys for all the infos. Guide has been updated. More spotting locations are always welcome 🙂

Observation deck now open from 9am to dusk.

Hi. Yeah, for RDU I usually go to the top of the parking deck mainly for Terminal 2. I’ve had no issues with security or whatnot. I went there once to watch Air Force 2 land, and it was a great view. If you want to see every part of what you need, I suggest to go here.

In spot 4, can’t you just get the Email from authority saying you can spot there? Then you show the police and they leave you alone after they see the letter

You can give it a try but I bet they refer to the official viewing deck that you go there.
-Julian

Just a heads up for any spotters looking spot here, the security has been getting rather strict on staying on the parking deck and taking pictures of airplanes. The security will issue a warning and tell you to go to the observation park, if they do approach you for this reason I would recommend either going to the park or just leaving and avoiding further trouble

A couple notes:
-Don’t forget the GA terminal has a second floor balcony from which you can spot arrivals on 5R/23L as well as GA ramp traffic up close. The staff there are very friendly and the terminal was recently renovated. Parking is free for 4 hours in the GA terminal lots. They used to have a door to an outdoor balcony overlooking the GA ramp but it has been locked ever since the renovation earlier this year. I’m not sure if there are any plans to allow public access to that balcony again. Keep in mind, you will have to shoot through the windows here, which may be hit or miss on cleanliness.
-An additional spotting location for 5L/23R arrivals right under the approach path can be found at these coordinates: 35.897839, -78.772880 . There is an access road off of Lumley which you can turn onto and park. I do not recommend this location during rush hour, as there is a lot of traffic passing by that may be suspicious of your intentions. I have captured neat photos of planes directly overhead on their way in to 23R.
-Another location close by is this vacant building and parking lot, located here: 35.897770, -78.770226 . It allows you to get offset from the approach path for more conventional spotting pictures but is close by, so longer lenses aren’t necessary.
-For 5L arrivals, 35.865421, -78.815774 is a good spot under the final path. Public lot at the hotel which hasn’t bothered me when I post up there.
-Set up at the old outlet mall for arrivals and departures on both runways. You will need a longer lens here (200-600mm range). 35.860343, -78.819340
-A correction to your description of 14/32- it is very much an active runway. Propeller GA aircraft land on it in the 32 direction and take off in the 14 direction.
-Spots 1, 3 overlooking 5L/23R are backlit in the afternoon/evening hours, which may be a dealbreaker for some spotters.
-At the other end of the parking lot at spot 4, you can get a good view of 5L/23R as well as t/w Juliet, which has been rather active lately due to ongoing t/w work on the north side of the field.

Hi Alex, thanks for you big comment. Is it possible to send us some photos that you took at these spots so we can add it to the guide to info@spotterguide.net
Usually we don’t add overhead locations only if you can make some nice front photos. But no belly shots.