Cotswold Airport (GBA/EGBP), which was formerly known as Kemble Airfield, is a small airfield in the west of England between Bristol and Oxford. The airport mostly hosts general aviation and flying schools, however it is also well known for its big storage and aircraft part processing site. This is the main reason spotter visit Cotswold where aircraft are stored from B737 and A320 up to B747 and A340 including rareties like some B727s. Thanks to the local company called “Air Salvage International”, which is running this business, the airport experienced rapid increasement of interested people and visitors lately. But apart from this Cotswold is also famous for Top Gear shows and Formula 1 test drives as real air traffic is actually very rare.

GBA is actively trying to change the image that Kemble is just an aircraft scrapyard but also a very active general aviation field with several based flying schools and a growing number of biz jets. While the stored airliners are obviously the main reason for us to visit, we probably should encourage that Cotswolds airport isn’t called aircraft scrapyard in online reports appreciating the management this way for their support.

The airport was built in 1936 as a Royal Air Force base (“RAF Kemble”) and still had military connection till 1993. After the famous Red Arrows were used to be based at GBA till 1983 here, the USAF took over the airfield and run a maintenance facility before they Americans also left and the British Army stored equipment here. GBA only turned into a private airfield with aviation usage again once a local businessman bought the site in 2001. Only in 2009, the airfield was renamed from Kemble Airfield to today’s name Cotswold Airport, which all added its part to the airfield’s new appearance.

Under THIS LINK you will find a list with the latest sightings at Cotwold.

View from a 3-step ladder: 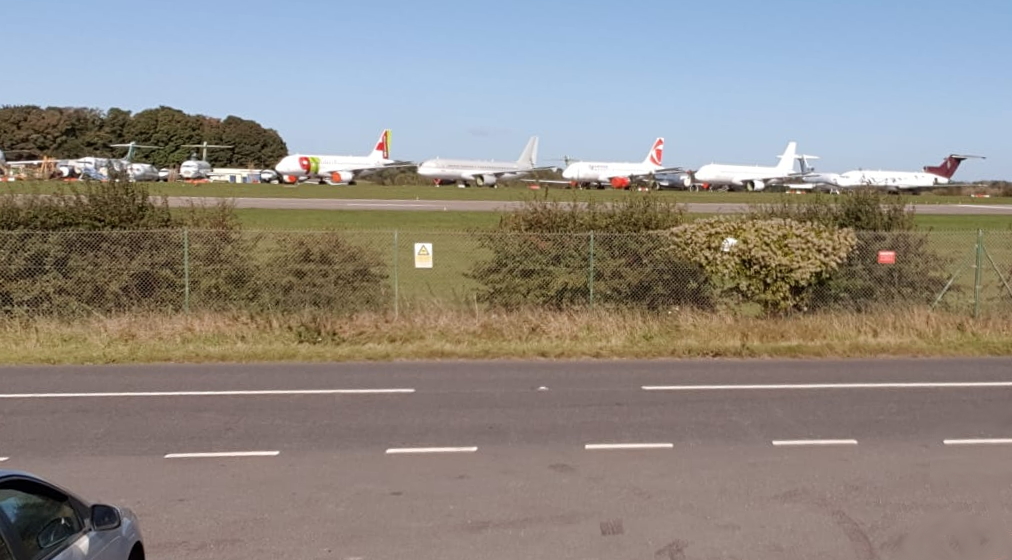 The street you have to enter from highway A433 towards airport industrial area:

Spot is easily just along the fence – this picture is meant to show how the fence is made: