After Malpensa Airport, Linate Airport is the secondary international airport serving Italy’s second largest city, Milan. The airport handles almost ten million a year and it serves as a main base for Alitalia. Linate Airport’s name comes from the small village where it is located although it’s official name is Airport Enrico Forlanini, after the Milanese inventor and aeronautical pioneer.

The airport is only 7km east of the city centre and its capacity is restricted by law to 22 slots per hour. Only domestic and international flights within the EU are permitted. The airport terminal features only five aircraft stands equipped with jet bridges, so most traffic parks out on the apron and passengers are ferried to and from their aircraft by bus.

Although Alitalia is by far Linate’s main airline customer, the airport is also served by a number of other European airlines, including Air France, British Airways, easyJet, KLM, Lufthansa, Iberia and SAS, amongst others. Air Italy also serves the domestic destination of Olbia from Linate. The busiest domestic destinations are Rome Fiumicino, Catania, Naples and Cagliari, whilst internationally the busiest routes are to Paris (Charles de Gaulle and Orly), London (Heathrow and Gatwick), Amsterdam and Frankfurt. The proximity of the airport to the city centre means that it also attracts a good number of business flights.

There are sensors installed at the perimeter fence so be careful and try to avoid a contact.

Cycle track - 36 Line up and arrivals 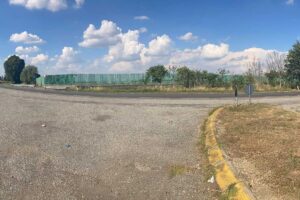 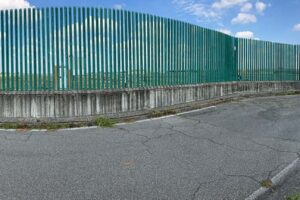 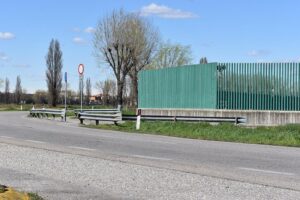 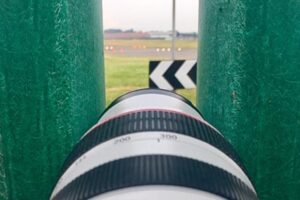 Gap for the lens


Cycle track - 36 Line up and arrivals

At the southern end just next to the fire station:

In the fence corner at the northern end:

Hi. No need to put spot #1 in the guide anymore, as you can see the displayed pics are very old and don’t match the current conditions. The fence is about 5 meters high and wired at this spot everywhere. Also the so called “holes” are not there, you can only take with your phone (even that is difficult) a shot through it. Maybe something of 15 – 20mms fits there. Constant police and security passing. I think you can remove the spot – Brgds, Matteo L.

Hi Matteo, I think the fence hasn’t change for years and it is still the same. On google street view there are photos from 2022, which shows the same fence. The mesh is indeed very tight but our author Clive managed to get some shots somehow through it, of course depending on the lens diameter.
Regards, Julian

Most flights will be moved to Malpensa

I visited spots #1, #2, and #8 in May 2019. All are great for viewing and photography, although the traffic at Linate is limited in variety, of course – a lot of Alitalia and the major European legacy airlines, plus easyJet. A couple of notes:

Spot #1 (cemetery car park) – there’s shade here, which is most welcome. You can hang out in the shade and just approach the fence when an aircraft is passing on the taxiway or runway. There were locals there doing the same thing.

Spot #2 (Terrapieno embankment) – a great location right near the end of runway 36, but the grass and weeds on the embankment were VERY high when I visited. Lots of insects and my legs got scratched up quite a bit by the weeds.

Spot #8 (Linate village) – also a great spot, especially if you walk north along the dirt track parallel to the fence. Bring insect repellent as there were LOTS of mosquitoes. I was there for about an hour and got probably 10-15 mosquito bites!

Good day James. Thanks for your feedback. I left some hints in the guide.
-Julian

Hello,
I understand Linate will be closed from the beginning of August till the end of October, but what is going to happen to the resident/visiting corporate flights during this period ? Are they going to Malpensa, Bergamo
or somewhere else ?