Charlotte Douglas International Airport (CLT) located in Charlotte, North Carolina, US. It’s one of the largest and busiest airports on the east coast of the United States with 44.9 million passengers one year. It used to be the hub for US Airways and it now becomes the second largest hub (after DFW) for American Airlines after US integrated to AA. CLT services more than 160 domestic and international routes.

CLT is one of the busiest airports in the USA so you will never get too boring there. However, around 90% of traffic will be American Airlines/ American Eagle, American Airlines A330s fly daily and seasonal routes to European cities like Frankfurt and London and Lufthansa A330/ A346/ A350 might be the only foreign traffic services regular flight in CLT. FedEx A300F and MD10 can be seen 5 days of a week. As CLT is a civil-military airport, USAF C-17 and C-130 can also be seen sometimes if you are lucky enough.
Please note, there is an empty space next to the museum which is good for spotting departure in 18L but please avoid it, the armed soldiers will ask you to leave immediately as they think you’re too close to the military ramp. Other than that, the authority is pretty friendly to the spotter and you will have a good time there. 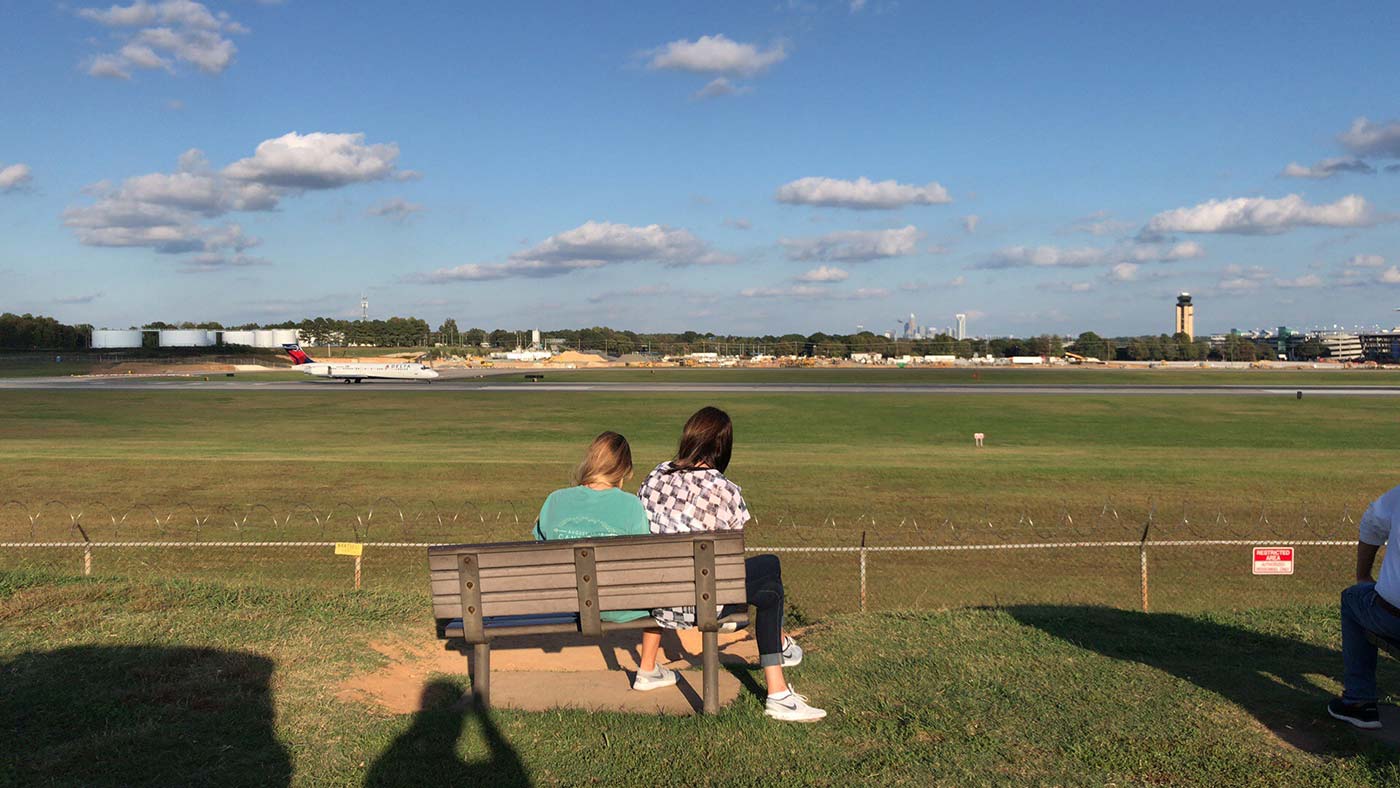 Taxing for 18C departure in the morning: 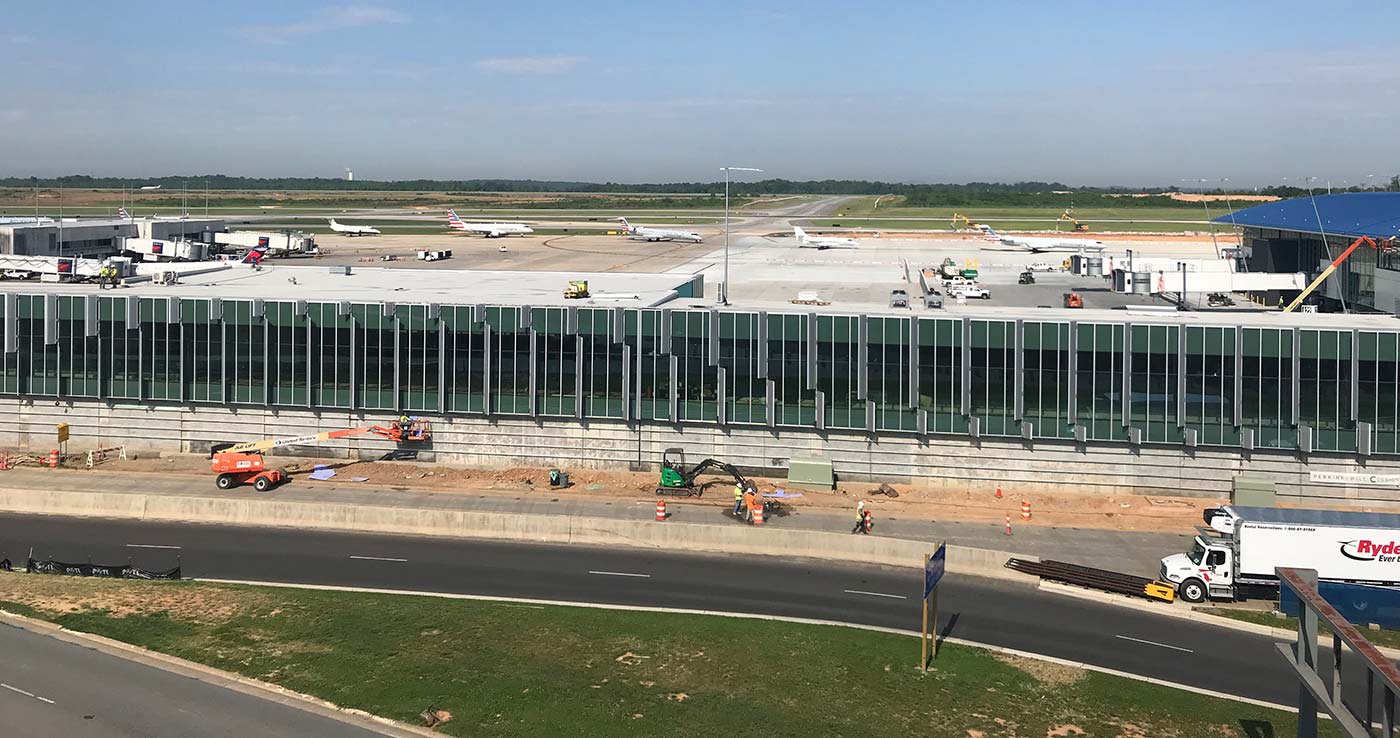 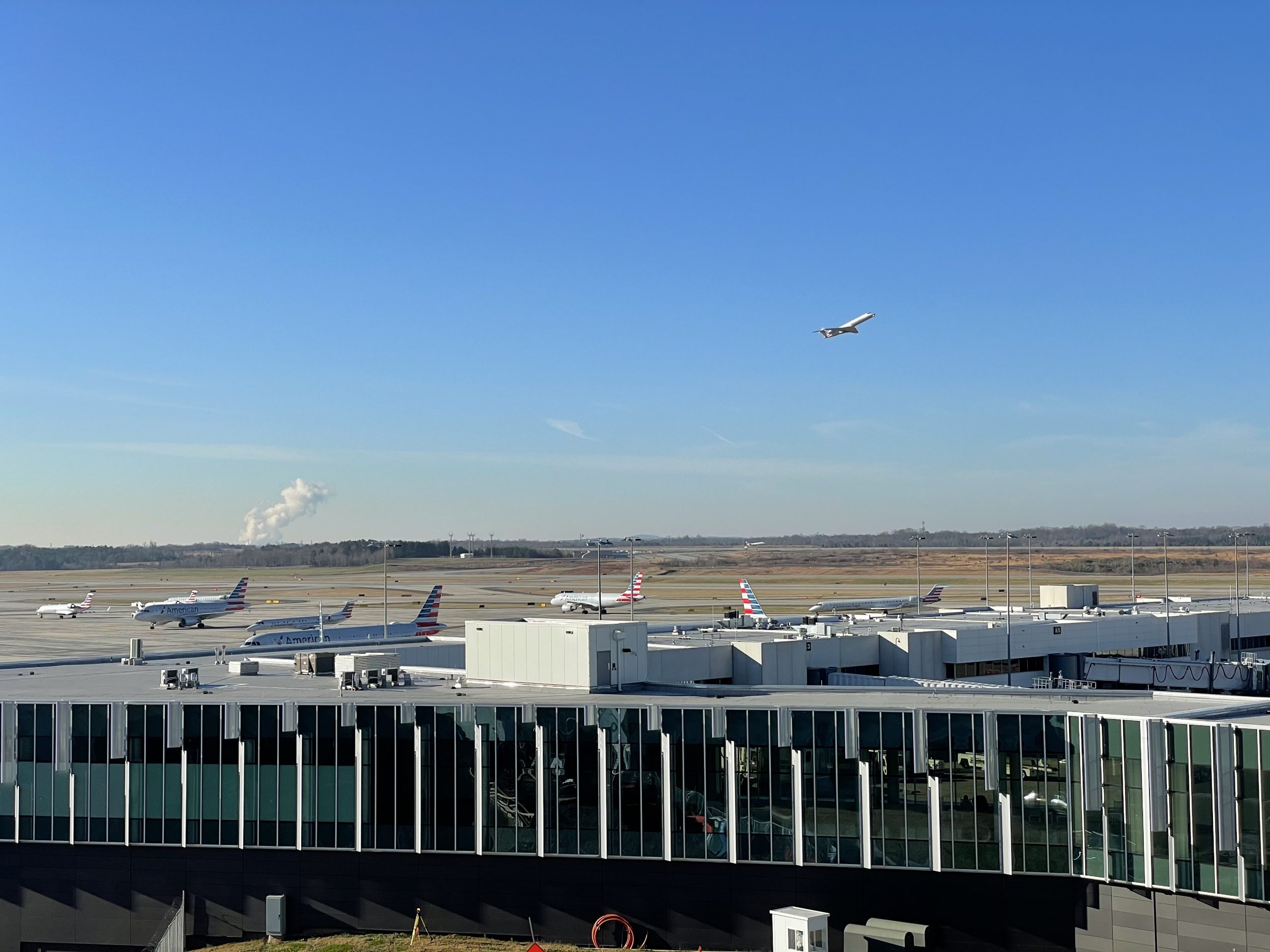 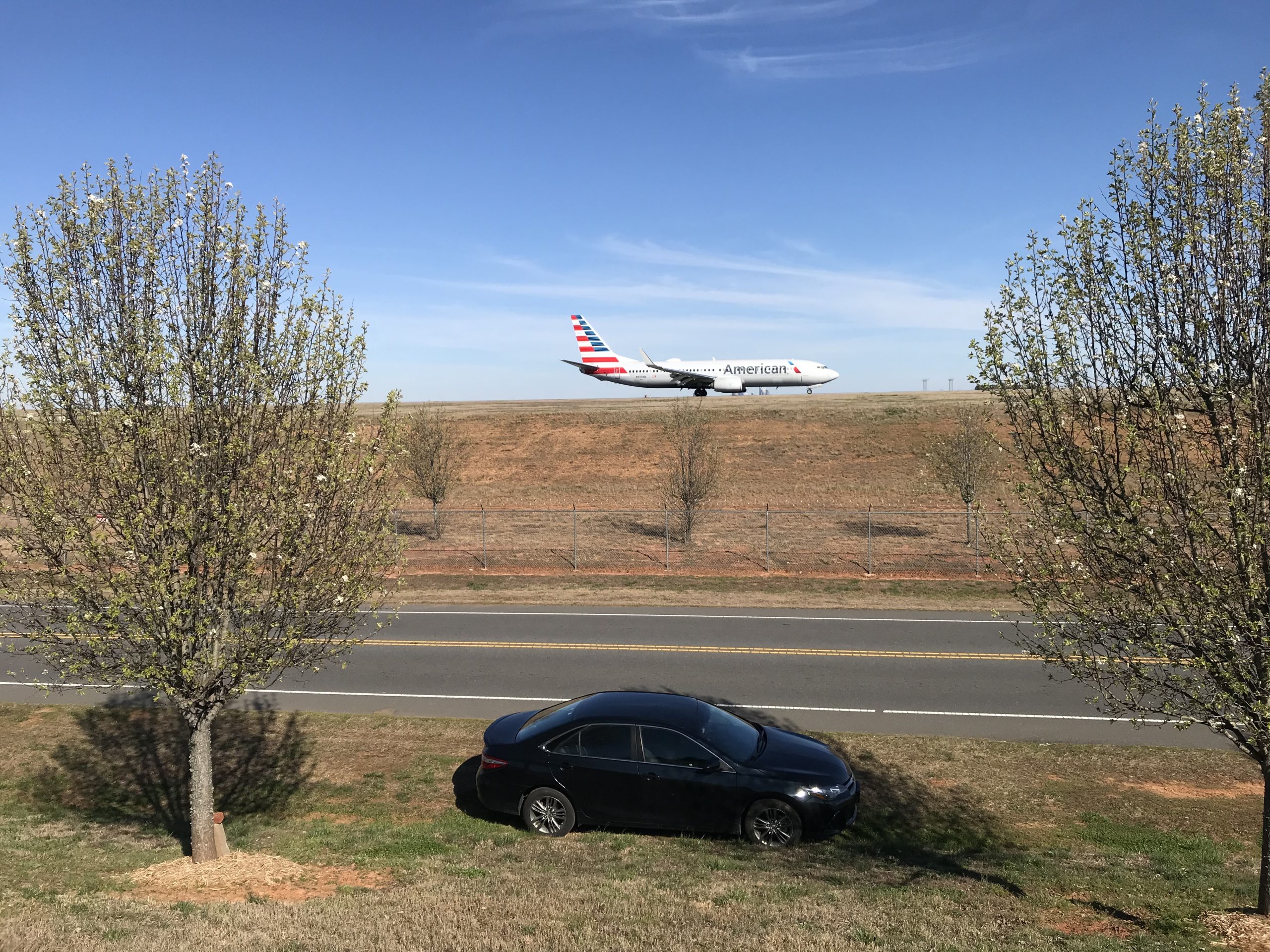 Does anybody know a place near runway 36R where I can catch traffic( mainly wide body’s like cargo jets)?

I visited CLT week of May 9th and spots #2 & 3 are a “no go” at this time. Right now the hourly parting is by reservation only and is typically always full.

The spots are still available but indeed the parking situation at the deck is tricky and you need a reservation.
-Julian

Anyone familiar with the overlook at Charlotte-Douglas, can you comment on when you might be able to view military aircraft taking off or landing?

Hi, military traffic (C-17s) will normally use 18L/36L as it’s closer to military ramp. The roof of hourly parking garage will be the best spot.

Think I found a new spot this weekend…if you look due east of the northern end of Runway 18C/36C, you’ll see the jet fuel pumping station (labeled on Google Maps as “Menzie’s Aviation CLT Fuel Farm”) Directly across the street there is a sidewalk along a grove of trees where I stood for a while taking takeoff shots from both 18C/36C and 18L/36R. On the day I went operations were northbound, but I would imagine you’ll get some really great taxi shots during southbound operations as the hill is only about 250 yards from the end of the apron, which is a hair closer than the runway is to the Overlook.
You will need a long lens…mine went out to 300mm and while that’s good enough for the planes coming off 18C/36C, if you want good shots of the wheels leaving the ground on that runway or anything at all coming off 18L/36R you’ll need longer than that. Quite frankly your shots of 18L/36R are probably too far to be excellent, but you should be able to get some really good ones off 18C/36C, particularly the first half of the day when the sun prevents you from taking good ones from the Overlook (Spot 1) (this spot also has the advantage of offering plentiful shade, a huge bonus on the morning I was there as the temp was already above 90° by noon). I also think this is a nice alternative to the parking garages to watch takeoff action from both runways. Again, that’s all during northbound operations…during southbound operations you will not be able to see anything on 18L/36R but you should get some great taxiing shots of 18C/36C, in which case 300mm will be more than enough.
To get there, I just walked from the Observation Area as there’s a sidewalk that goes around the northern end of 18C/36C. It’s about a mile and you can get some shots from really interesting angles along the way, although the fence and the terrain prevent that coveted straight on takeoff shot. I saw a few people walking and jogging for exercise along the same sidewalk so I don’t think they’ll mind an unattended vehicle parked at the Overlook. Looking at the walking route I highly doubt there’s anywhere that airport security would allow you to park closer.

Hi AJ, thanks for the info about this location. I think I see where it is on google maps. The option to shot the line up on 18C sound interesting too.
Can you provide us some sampel shots you took there and send them over to support@spotterguide.net

Hey! Thanks for the info. I was wondering if there are any good spots besides location 4 and the parking deck to go plane spotting for 18L/36R? Location 4 seems a bit too outgoing if you know what i mean. Thanks.

Hi Kavi, as far as I know, there is no more spots for 18L/36L except for those two locations. Actually location 4 is almost gone now since the airport built a high fence last year. There is a parking lot at the south end of of 36R but it’s in private property, last time my friend went there and someone just called the police, so it’s not that ideal.

I LOVE plane-watching! I would love to know if in Charlotte airport, can you view ANY airplanes as they are about to leave the runway on departure? This is my OBSESSION for some reason. I would appreciate your help as I plan to go there soon. Thank you very much!

PS: I needed to edit this message above. I meant “at” the airport and, what if any runways could I view the close takeoff mid-way of the departure…as it is leaving the ground! tks

For spot number 4 they have recently installed a new taller fence, not sure if standing on a car is tall enough to see over it.

Hi, Thomas. Thanks for your comment. Yes, we just went to that location last week and have noticed that problem. We stood on the back of a pickup and could just be able to spot the planes on the runway. I think it might be fine to stand on the roof of the car. But spotting planes on the taxiway maybe no longer possible. I will update it to the guide.

I have spotted all around CLT and I generally agree with most of what you have published. The observation park is great and the hourly parking garage top deck is a particular favorite. There is a little used spot along West Boulevard that allows for interesting shots of 18R arrivals and 36L takeoffs. There is parking at a nearby industrial park and a nice wide sidewalk that runs around the CLT perimeter. I also found numerous places (on weekends) along Yorkmont Road to catch 18R/36L action. However, my favorite spots are along Wallace Neel Road. The problem is I have been shooed away by security many, many times for parking off the road. Too bad because your No. 5 listed spot up on the hill is special. I don’t shoot photos – just videos. I have many spotting videos on my YouTube page with the majority being at CLT. Take a look at my CLT and and general spotting playlists. Thanks.

Thanks for your advice and nice video. Yes, parking off-road is not always tolerated, so normally I will not stay there for too long.

Hello John and thanks for the info above! I LOVE plane-watching! I would love to know if around the Charlotte airport, can you view ANY airplanes as they are about to leave the runway on departure, as CLOSE up as possible anywhere? This is my OBSESSION for some reason. I would appreciate your help as I plan to go there soon. Thank you very much!

Sharon,
Without question, the best up-close spot for departures (especially) and arrivals is the public observation area. But you won’t be close to the point where the plane leaves the ground. Maybe on a weekend you can try some spots from parking lots for businesses along Yorkmont Road (location of FedEx and UPS). The problem is a fence marring a clear view of the takeoff points for planes on 18L.

This video has a some action from the spot I’m describing, beginning at the 4:50 mark. The address of the place I was at is: 4150 Yorkmont Road.

I hope this helps. Have fun!