Beijing Capital International Airport (IATA: PEK & OACI: ZBAA)is currently the second busiest airport in the world and the busiest in Asia. It handled 100.1 million passengers in 2018 and traffic is split on three runways, of which the last was only recently opened in 2007. Even though arrivals are often split on all three runways, you will catch lots of movements, due to the extremely high traffic. With the opening of the new Daxin airport in China, lots of carriers moved away from PEK like China Southern, China United and more SkyTeam carriers.

Capital Airport is the main gateway to the Chinese capital city and a major hub for the four major Chinese airlines: Air China and Hainan Airlines. Of course you will see lots of international traffic from all over the world, with most major carriers flying at least once a day to PEK.

Cargo operations are not as strong as passenger traffic, but you can see a few local carriers like SF Airlines and China Postal, which mostly operate flights in the morning. Use the official airport website for scheduled and estimated times on these flights.

There is one major drawback to spotting in Beijing. Even though the weather is generally pretty good and the area enjoys a great deal of sunshine over the year, the city (and the airport as well) frequently suffers from extreme air pollution (smog), which makes spotting terribly difficult, as the sun can be blocked out and/or you will often only have a gray or white background in your images.

Most locations around the airport are on the south side, so when landings from the south are in progress. This is the best direction for spotting and this guide primarily deals with these ops. PEK mainly operates in the northernly direction (i.e. landings/take-offs from south to north) due to the restrictions of airspace. In general, Beijing is a very spotter friendly airport and you need not worry about getting into trouble with the police.

visit PEK official website to look for information of flights coming in and out of PEK. The website usually updates the flights for the next day at 11:00 p.m. (Beijing time, UTC+8, sometimes at 11:30pm). Airlines not in their database will be marked as “北京空港地面服务有限公司”, mostly includes military and government aircrafts. 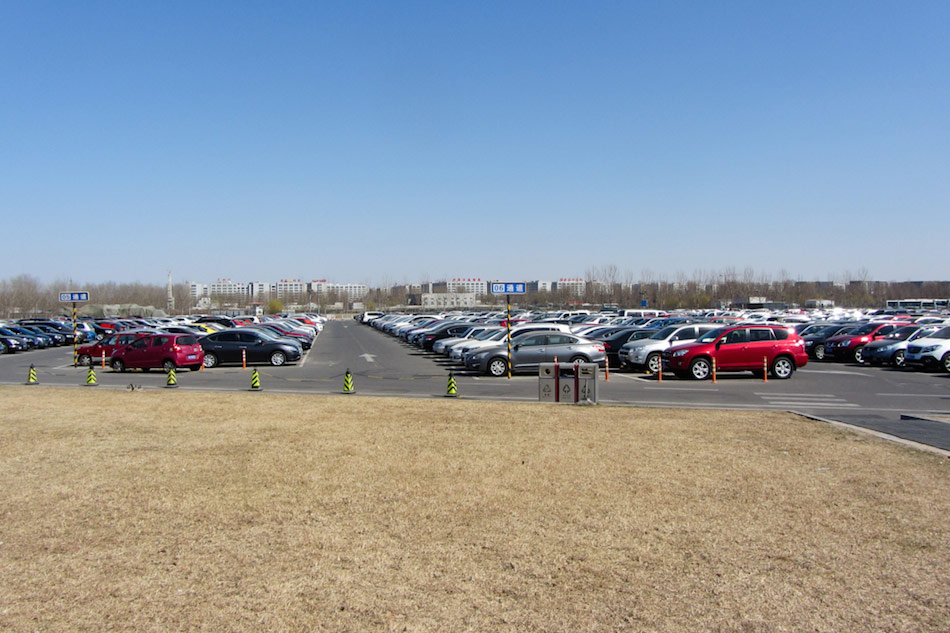 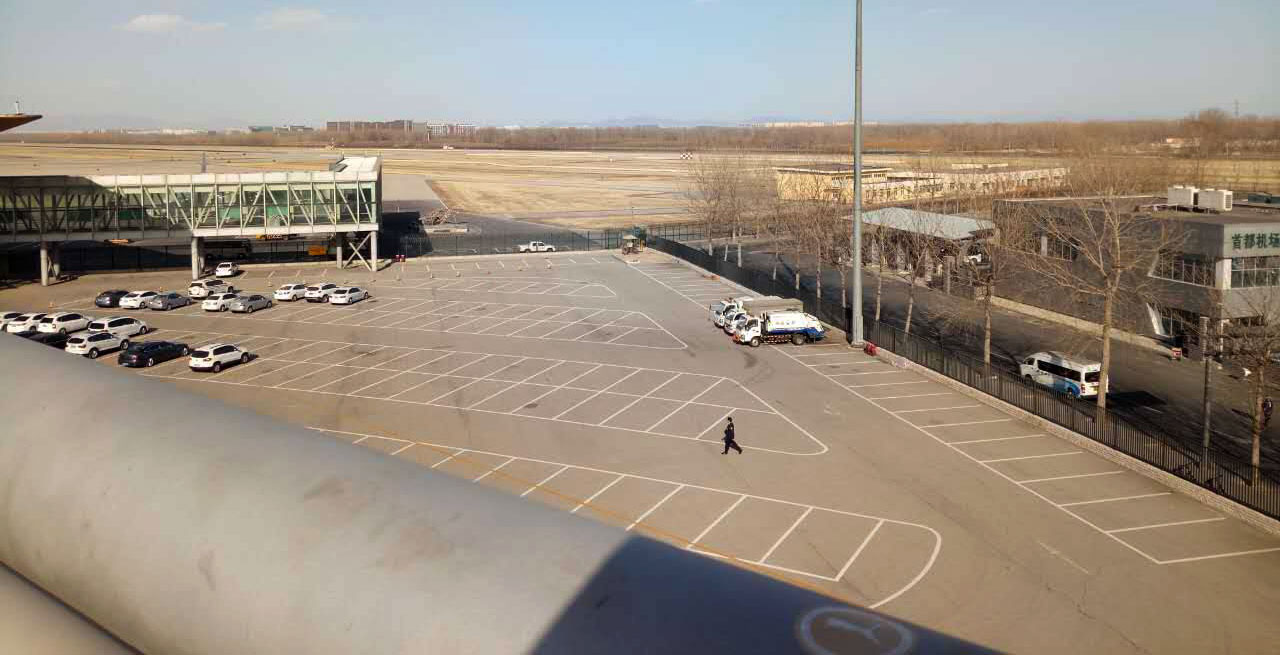 I hang around the Capital Airport during the last days and have some minor updates:

Location 4: The park around the pond was closed all the time for the sake of the pandemic.

Location 5: The park was accessible without any daily visitor number limitation but the hillside itself has been cordoned off for pandemic prevention. Hence line up shots are almost impossible. If you shoot from a lower position on the lawn it will bring the fence into the bottom of your pictures.

It is still closed and I wouldn´t expect that it will be reopened soon. The pandemic situation is for Chinese relations quite severe at the moment.

According to my planespotting experiences, there are at least five more planespotting locations at runway 36R/18L
1. T3 West departure bridge. This is on the same bridge of location 3, but it is on the west. Available for taking photos of approaches and line-ups on runway 36R in the morning.
Be extremely careful when spotting at this location: there is no pedestrian sidewalk on the bridge, so stay low-profile and watch out for incoming vehicles. Encountering police activity is also possible, since it is not allowed for pedestrians to walk on this bridge. There are also Noise protection panels at this location, so look out for photographing angles.
2. A large field on the south of the park. Search location 二纬路与一经路交叉口, and the location is on the southwest of the intersection. Available for spotting morning 36R approaches. It is recommended to go there by taxi, since there aren’t a lot of parking spots nearby.
3. Gangshan bus station. Search location 岗山公交站. Spotting location is on the sidewalks near the bus station. Available for taking photos of afternoon 36R approaches.
4. A location for spotting takeoffs at Runway 36R: Search 北京天竺综合保税区快件（货运北路02号）, available for spotting afternoon takeoffs of runway 36R, but requires lens with long focal length.
5. An overpass on 航站楼联络线(Terminal Connection line), available for spotting afternoon takeoffs of runway 18L, but look out for police activity: this location is close to the business jet terminal.

Also some updates in 2021:
1. If you are planning to visit the park at location 5, you need to make an appointment on wechat prior to your visit. You can make an appointment for today or tomorrow. There are 1000 slots available each day, and it is highly unlikely that the park will run out available slots for this day. It is also advisable to confirm whether the park is open or not with a local planespotter – the park had been frequently closing and opening during summer vacation.
2. Private vehicles are not allowed to drive in or to park at the parking lot at location 2 since it is for airport staffs. You can choose to park your car at the Hilton hotel nearby and walk to the spotting location.
3. (Unconfirmed) Spotting location 11 is unavailable – a new building (possibly a hangar) is being built there
4. Spotting location 12 is also unavailable – spotters are no longer allowed to enter the parking lot. However, spotters are still allowed to take photos outside the parking lot. A better location is at the south of the parking lot – walk south along the road, and you can take photos at the side of the road. You can see planes lifting off on that position.
A remark for location 12: look towards the east when arrive at the parking lot, and you can see an open space between two buildings. you can take photos of planes taking off at runway 01 in the afternoon.
Another tip: you can visit PEK official website http://www.bcia.com.cn to look for information of flights coming in and out of PEK. The website usually updates the flights for the next day at 11:00 p.m. (Beijing time, UTC+8)(sometimes at 11:30pm). Airlines not in their database will be marked as “北京空港地面服务有限公司”, mostly includes military and government aircrafts.
You can ask a local planespotter to know how to use this website or let him/her look through the flights for you.

A question about your update for the park, spot #5. Whats the number to make that appointment on wechat? Is this an official number? Is it possible to talk in english?
-Julian

Sorry for the late reply.
The appointment is not made through a number, but through a thing that works and acts like QR-code. We call it 小程序码 in Chinese and it directs you into a page that looks and acts like an app but it is in wechat and does not need pre-download. The appointment does not involve talking to a real person face to face or by telephone. It only involves submitting a form through this “app”. I have a photo of this code, but I assume there should be a piece of paper at the park gate which have this code on it. You can ask other planespotters or tourists for help, but don’t expect the park guards at the front gate to speak english. 1000 is not a small number, and it is highly unlikely that the park will run out of slots, so even making an appointment at the front gate is possible.

Thank you for the explanation. I have added you infos into the guide.
-Julian