THE AIRPORT HAS BEEN CLOSED ON NOV 8TH 2020 AT 1500. ALL FLIGHTS MOVED TO THE BERLIN BRANDENBURG AIRPORT

Yes, Tegel is still opened and it’s being more embarrassing for the BER-airport-chairman day by day TXL is opened and BER is closed. But for spotters it’s not even bad that Tegel Airport is still in operation because it is a lovely airport to take photos with good traffic!

Tegel is still Berlin’s busiest airport, handling nearly 21 million passengers in 2017. After Air Berlin filed for bankruptcy in 2017 the new major airline in TXL now is Easyjet. Over 20 A319/A320 are based hier. Other local airlines like Germanwings and Laudamotion are also operating from TXL.  Wide-body aircraft flying to TXL are Qatar Airways (B773), United (B764), Scoot (B788), Hainan Airlines (A333), Turkish Airlines (A330) and Mongolien Airlines (B763). In summer months also Delta (B763), from 2019 American Airlines (B763) and Air Canda Rouge (B763) are flying to Berlin TXL. Government airplanes from all over the world can be seen frequently in TXL when politicians meet with the Chancellor of Germany. The German Luftwaffe A319/A343 and A400 are visiting TXL multiple times in the week.

The airport’s history is massively affected by the history of Berlin as Tegel became West-Berlin’s most important airport after the Berlin Wall was put up and Tempelhof became too small and overloaded – as everyone knows, Tempelhof was the responsible airport during the blockade by the Soviets so the US was forced to provide their part of Berlin via the “Berlin Airlift”
But enough talk about its history, let’s see what Tegel has to offer for the present – Here’s the guide!

The terrace offers (as said) an awesome view, that’s why overview shot are difficult for this spot – we tried our best.
Western direction:

As help, how long aircraft “could be” to fit in the holes between the poles: 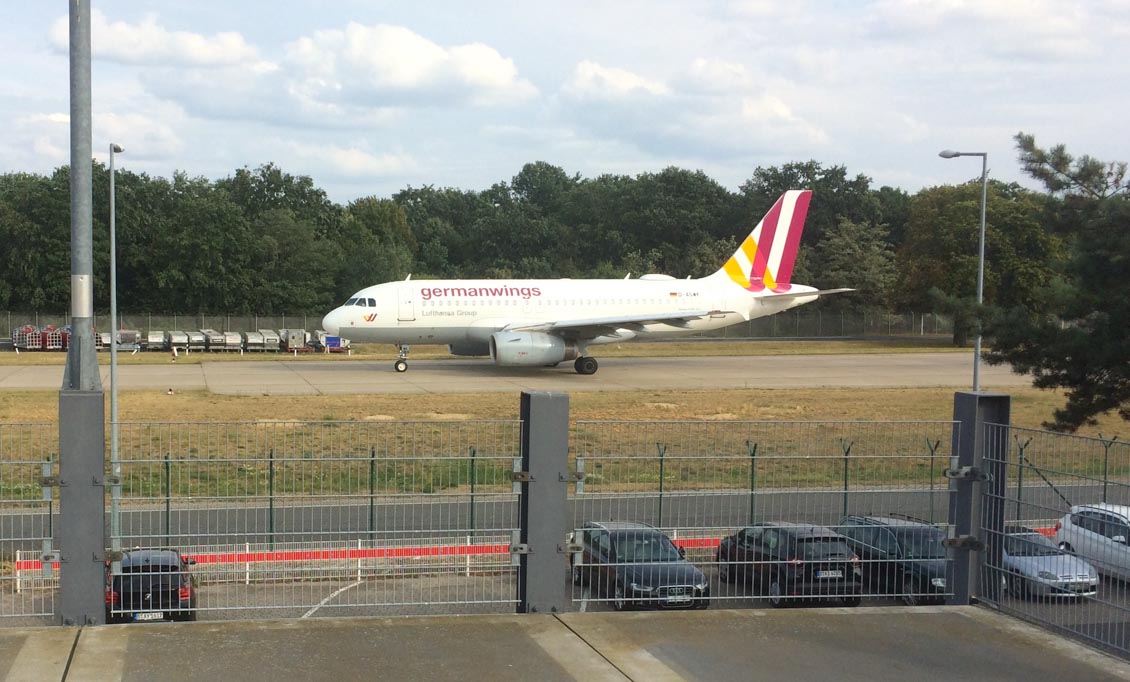 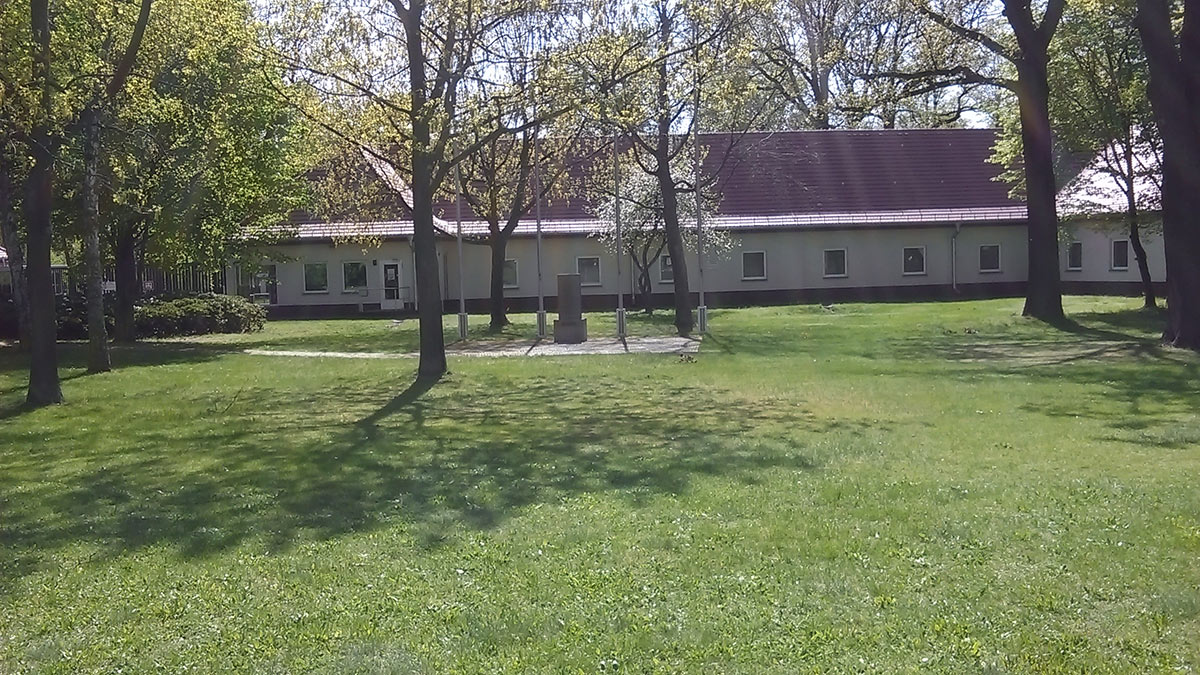 Crossing opposite of McDonald´s 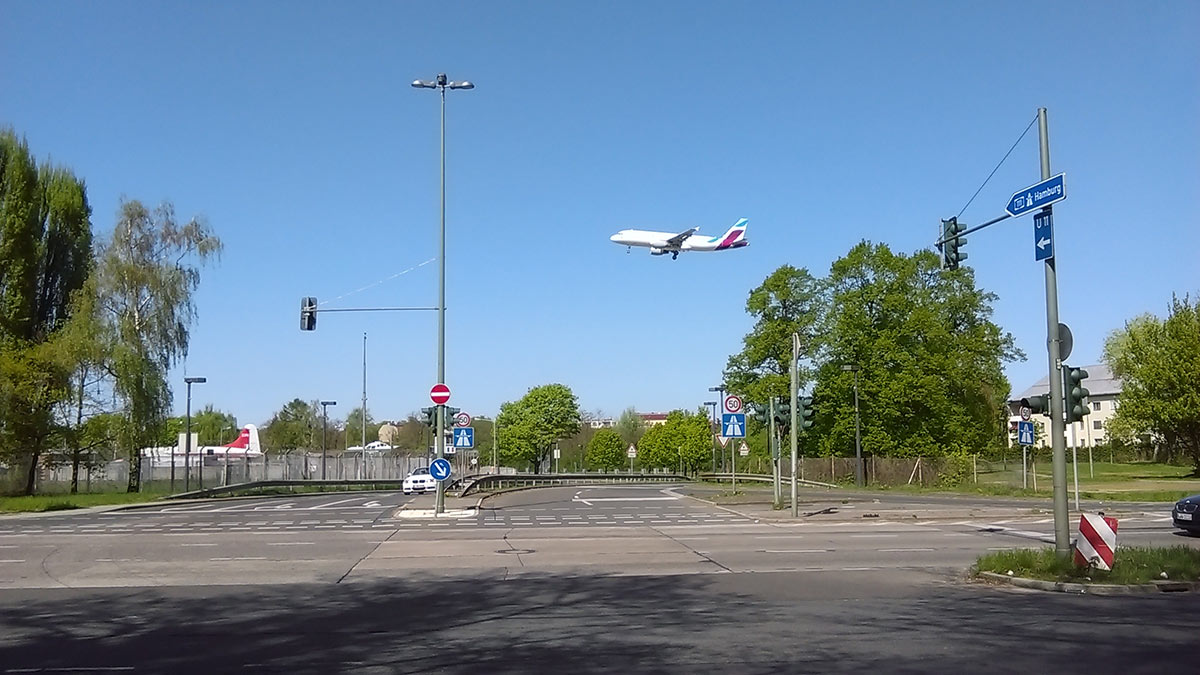 I will try to go this week to Tegel depending on the weather to be there a last time before it’s get closed and used as a park and living area.
I have some questions could you please help me out?
Spot 5: Do I need a ladder as the fence looks quite high or should I put my lens through the fence? What lens do I need for normal side shots with full aircraft? 24-70mm or 70-200mm or 100-400mm?
Spot 7: as reported the containers are gone, ladder seems not that good. Does it make sense to move to the bigger street (Kurt-Schumacher) directly at the fence (opposite holding point) and use a ladder or one of the small “buildings” there to get a good view?
I could think that the gate is maybe blocked with other spotters and due corona we should keep distance.

Any other hints for some good shots for a last visit? Or a small airport worth a visit? Thanks guys

Hi Stefan,
For Spot 5 just stick the lens through the fence and a 24-70mm crop is ideal.
The container is back at Spot 7. You could also use the small power house next to the holding line for runway 26L.
It is also possible to visit the observation deck a last time by appliing on this webside.
https://www.danketegel.berlin/main_frontend.php?error=x

Thanks Tommy, very helpful. Good to know the container is back then I would have a chance, otherwise the power house could be good.
Whats with traffic at spot 5? How many planes will really go here? Will police bother at spot 5 due it’s very close to the highway? They could say you are standing too close and therefore disturbing drivers.

For the deck I have read there that you have to book a slot 1 week prior visiting. I would go for maybe some night shots after 6pm till closure. But I can only apply 24hrs prior the visit due the weather changes. Any information on that or should I better contact the airport for this question?
I also see many slots already booked so I can not go on the deck when simply asking on the day?

No issue with police at Spot 5. Use the small walkway and everything is fine. Traffic is very low there and depends on the tower what way they send the plane.

You can book at any time for the given dates available for the observation deck as long as there are free slots. Booking should be done prior because they will deny you access if you don’t have a ticket.

Once thanks Tommy, I got a ticket now for a 7PM slot to take some night shots. Lets see if I can really go otherwise I will delete my booking.
Other night shots are not really possible as the towers could get problems with light from inside causing halos and maybe police not linking when using a tripod. Normally police doesn’t like that because of safety reasons.

For Spot 5 where to park best? The parking near terminal seems quite expensive with 5€/hr.

Is there currently a chance to take good night shots at SXF? The deck seems to be closed. Will try to shoot some arrivals and look if something is parked at the hangars.

@Team
just found that the planeboys links are not working, seems you have https and they use simpel www. Maybe interesting for SXF 🙂

Has anyone been to TXL recently? I wonder if the containers spot is still available.

Hi PM, I’m from Berlin and last I’ve visited this spot the container wasn’t there sadly.

Hi, next week I will go to Berlin TXL for Spotting and I want to get the Qatar Airways 777 in the night. The visitors terrace closes before it arrives. Do you know from where I can get the best night shot of it when it is on its Parking position?
Best Regards

Almost impossible, because the parking position can be seen well only from the visitor terrace.
Sometimes there are events, when the terrace is opened into the night as well, but quite rare!

According to the airport website the opening of the visitors terrace is 9am during summer…
I will have a look tomorrow, but I guess this is more accurate than our information in here?

Thanks Timo, we have corrected the opening hours.

Using the stairs or elevator. Its a depot store and open to everyone.

Hi Gerry,
depends on the angle you like, I would suggest to walk a few more meters down and use Spot#8. You will find a bit shadow there (important these days…), whilst the roof of Bauhaus is nearly uncovered. Light at both positions is good in the morning till around 13:00/14:00. Food/drinks available near both positions from a McD or KFC.
Regards Andreas

Hi there,
I’ve just been in Berlin Tegel and want to make an update regarding the ladder. A ladder is highly recommended for spots near the airport fence, such as Spot 7, Spot 12. The fence is very high so you need very high ladder, 8 STEPS!

Hi Emmi, its not recommend to use a ladder as security will be there soon or later and tell you to stop spotting. Take the photos through the fence.

Hi Emmi and Julian, are the posts in the crash gates around the airport wide apart enough to put a lense through? Or even the mesh of the fence, so that a normal 200mm lense would get a clear view through it?

Where is the best place you can park you car when going to spot 7?

Please take a look at our map, where we marked the place we recommend for parking with “P” just next to Spot #7.

Thanks for the replt, i guess I didn’t notice the parking mark earlier :). Anyway, I’ve found it by myself:)

I also have some informations about spotting at TXL after my last visit (on 23.11.2017) that may be helpful:

– There’s a “no vehicles (expect locals)” road sign on Rue Rene Laenec. I did ignore it and noone bothered, so I guess it’s fine to park there. However be aware, that someday somebody may bother

– You can take pictures through the turngate at Rue Rene Laenec. You don’t need ladder for that. The space between turngate bars is about 10cm wide, so you can easly fit even a telephoto lens (canon 100-400L did fit). Few airport workers and policemen passed me, and noone said anything expect “hello”, so you shouldn’t be bothered. (If you want I can provide photos taken form this location, and a photo of a gate itself)

– I saw few people with pretty tall ladders (like 3 meters tall) along the fence. They also weren’t bothered by anyone

– Visitors terrace form November to March is open from 11:00 to 16:00. You can buy tickets only in terrace opening hours.

Ofcourse I meant “except”, not “expect”;)

Thank you for the information, we just updated our guide!
Thanks, but we don’t need more example pictures, but it would be great, if you could send us the overview picture – using following email-adress:
info@wp11121639.server-he.de

On the site of Berlin Tegel it says that the observation deck is open every day, winter or summer with different opening hours.

Is there any chance to add info about locations around aproach line for RWYs 08?

Do you have pictures and would you be able to describe the spots a bit? It would be lovely if you help us!

Actually I was hoping that you guys know something about spotting locations on the west side of the airport. I’ve only heared about spot called “Tegeler Wald”, from where you can take photos of aircraft aproaching rwy08, and you also can take a photo of LHs B707, which is (or was) standing somewhere on the airport.

We have contacted a local spotter from Tegel, who hopefully can help us out! We will be adding a spot for runway 08 approach as soon as possible!

Thanks for your interest
Marlin